Helen Illes, a FESA-SES Training Officer and a volunteer of the SES Mounted Unit has won an award in another field of her passion, writing.

Here is an article from The West Australian. Source-  http://au.news.yahoo.com/thewest/entertainment/a/-/entertainment/8474100… women/Well done and congratulations to Helen.Pen mighty for WA womenHEATHER ZUBEK,

The West Australian December 8, 2010, 11:05 am  The stories were as varied and fascinating as the women who wrote them. The Society of Women Writers (WA) recently held their annual Bronze Quill luncheon with more than 40 writers from around the State.  The Lord Mayor of Perth, Lisa Scaffidi, and patron Ruth Reid were on hand to present service certificates and announce the winner of the coveted Bronze Quill award.The society was formed in 1925 in Sydney when the wife of an English newspaper tycoon asked to meet women writers.  The gathering was such a success that the Society of Women Writers was formed. The society was based in Sydney until the early 70s using a postal critiquing system.State branches were formed in 1978 because of the rising number of members.

The WA branch continued as a correspondence group until 1981 when the first president was appointed. Preparing to celebrate its 30th anniversary next year, the society continues to grow with more than 200 members.  The members are a who’s-who of WA writing talent. Published authors, award-winning writers and first-time scribblers come together to encourage and learn from each other. Members include novelists Janet Woods and Maureen Helen as well as columnist Raelene Hall.Metropolitan members regularly get together to hear guest speakers such as _The West Australian’s _ Travel Editor Stephen Scourfield and performance poet Janet Jackson.The guest speaker for October, Sue Clennell, proved quite titillating with tips on how to add sexuality into writing.Retreats are held each year as well as opportunities to have work published.

Branch president Helen Iles won the prestigious Bronze Quill trophy this year  with her story In Bradley’s House about the struggle of a Vietnamese girl with a rich family claiming her husband’s estate as their own.  Looking to their 30th anniversary, Iles says the society will head out into the public place to increase membership. “We are always looking for women writers of any age and from anywhere in the State,” she says.For more information visit the website www.swwofwa.com or phone 0415 840 031. 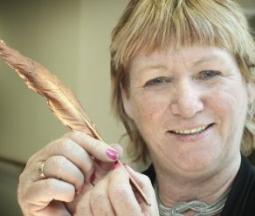