SES  Volunteers from a number of Metro SES Units were call to assist at the scene of a multi-million dollar fire in Claremont last night .  he  blaze ripped through the offices of the Town of Claremont , destroying the complex and causing millions of dollars damage.  The fire started some time between 6.30pm and 7pm in the complex’s adjoining library before quickly spreading to the main council offices.  The fire is believed to have started in the library’s ceiling.

Firefighters struggled to contain the blaze, with police directing traffic away from the scene at the busy intersection of Stirling Highway and Bayview Terrace.   Town of Claremont chief executive officer Stephen Goode said he believed he was the last to leave the offices at 6.30pm and had set the building alarm as he left.  The council’s records and other invaluable items in the building that were irreplaceable were completely destroyed, he said.  Around 50 firefighters attended the blaze but had to fight it from outside because of the danger of roof collapse.

Mayor Jock Barker said all council records may have been destroyed and in the council chamber there were photographs of 112 years of municipal history.    “We’ve just witnessed the loss of Claremont’s local government history,”   Mr Barker said he did not think the fire was deliberately lit.  The Heritage Council of WA on its website describes the complex as “comparatively rare as a local government administrative centre, originating in the 19th century and partly reconstructed and refurbished in the 1930s Art Deco style”.

One of the major tasks given to SES Volunteers was to provide disaster site lighting to the area for safety and security purposes . SES Volunteers in conjunction with the incident controller assessed where lighting was required and how this could be achieved.  SES Volunteers positioned floodlighting trailers into strategic locations to illuminate the scene. 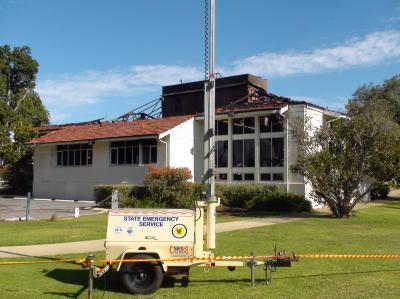 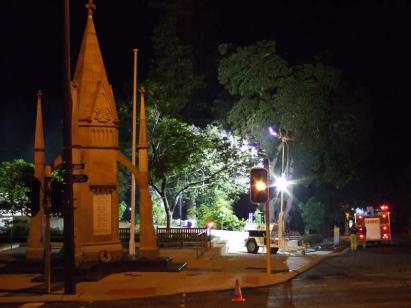