Hell Fire Pass is one of the many cuttings made by Australian Prisoners of War (PoW) to the Japanese to allow the building of the notorious 415km “Death Railway” from Thanbyuzayat, Burma to Ban Pong, Thailand to join existing rail networks during World War II. The Japanese needed the railway to provide supplies for its army and directed about 180,000 Asian labourers and 60,000 Allied Prisoners of War into forced labour. It was slave labour with poor food, medical support and extremely hard labour. Of these, around 90,000 Asian labourers and 16,000 Allied POWs died from brutality, exhaustion and disease, of which 2,815 were Australian.

Even today, the Japanese Government does not officially recognise this blight of their history, although there are sections of the Japanese community that do. Many Japanese military were executed after the war for related war crimes.

Joe and Phillip were part of a tour conducted by Defence Reserves Association of WA, led by retired Lt Col Peter Winstanley. Peter has been visiting and researching the history of the railway line for over 10 years with plans to write a book to remember all the medical people who were part of the railway construction and imprisonment of Australian military. The tour included regular tourist sites such as The Bridge on the River Kwai and near cemeteries at Kanchanaburi and to sites of railroad and PoW camps not generally known by the public and often lost to farming or the jungle. Many of the tour group were direct descendants of PoWs who had died or worked on the line. Joe and Phillip both had fathers who were Prisoners of War, however both fathers were prisoners of Germany.

A short service attend by representatives from Australian Embassy and Army as well as many tourists who had also made a special pilgrimage. It was moving for all especially those who had come to lay wreaths and pay homage to lost family.

Joe and Phillip also had some adventure fun as well. Participating in “Flight of the Gibbon”, a 3 km long flying fox network up above the jungle trees was one activity was a real buzz. Certainly our background of SES vertical rescue was an advantage to our confidence. 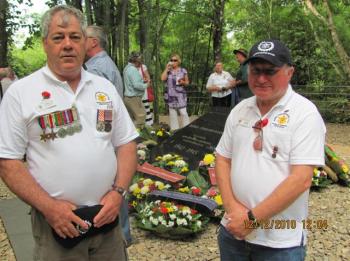 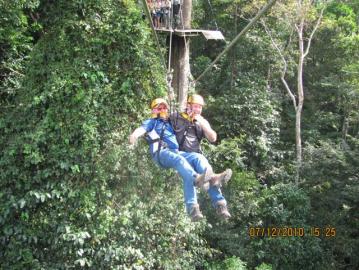 Flight of the Gibbon