They shall grow not old, as we that are left grow old;
Age shall not weary them, nor the years condemn.
At the going down of the sun and in the morning
We will remember them. 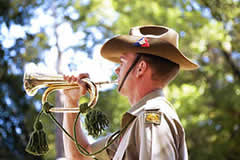 Why is this day special to Australians?

At 11 am on 11 November 1918 the guns of the Western Front fell silent after more than four years continuous warfare. The allied armies had driven the German invaders back, having inflicted heavy defeats upon them over the preceding four months. In November the Germans called for an armistice (suspension of fighting) in order to secure a peace settlement. They accepted the allied terms of unconditional surrender.

The 11th hour of the 11th day of the 11th month attained a special significance in the post-war years. The moment when hostilities ceased on the Western Front became universally associated with the remembrance of those who had died in the war. This first modern world conflict had brought about the mobilisation of over 70 million people and left between 9 and 13 million dead, perhaps as many as one-third of them with no known grave. The allied nations chose this day and time for the commemoration of their war dead.

On the first anniversary of the armistice in 1919 two minutes’ silence was instituted as part of the main commemorative ceremony at the new Cenotaph in London. The silence was proposed by Australian journalist Edward Honey, who was working in Fleet Street. At about the same time, a South African statesman made a similar proposal to the British Cabinet, which endorsed it. King George V personally requested all the people of the British Empire to suspend normal activities for two minutes on the hour of the armistice “which stayed the worldwide carnage of the four preceding years and marked the victory of Right and Freedom”. The two minutes’ silence was popularly adopted and it became a central feature of commemorations on Armistice Day.

On the second anniversary of the armistice in 1920 the commemoration was given added significance when it became a funeral, with the return of the remains of an unknown soldier from the battlefields of the Western Front. Unknown soldiers were interred with full military honours in Westminster Abbey in London and at the Arc de Triumph in Paris. The entombment in London attracted over one million people within a week to pay their respects at the Unknown Soldier’s tomb. Most other allied nations adopted the tradition of entombing unknown soldiers over the following decade.

After the end of the Second World War, the Australian and British governments changed the name to Remembrance Day. Armistice Day was no longer an appropriate title for a day which would commemorate all war dead.

In Australia on the 75th anniversary of the armistice in 1993 Remembrance Day ceremonies again became the focus of national attention. The remains of an unknown Australian soldier, exhumed from a First World War military cemetery in France, were ceremonially entombed in the Memorial’s Hall of Memory. Remembrance Day ceremonies were conducted simultaneously in towns and cities all over the country, culminating at the moment of burial at 11 am and coinciding with the traditional two minutes’ silence. This ceremony, which touched a chord across the Australian nation, re-established Remembrance Day as a significant day of commemoration.
Four years later, in 1997, Governor-General Sir William Deane issued a proclamation formally declaring 11 November to be Remembrance Day, urging all Australians to observe one minute’s silence at 11 am on 11 November each year to remember those who died or suffered for Australia’s cause in all wars and armed conflicts.

In most ceremonies of remembrance there is a reading of an appropriate poem.

One traditional recitation on ANZAC Day is the Ode, the fourth stanza of the poem For the fallen by Laurence Binyon (1869–1943). Binyon was the assistant keeper of prints and drawings at the British Museum, and the author of several volumes of verse. For the fallen was first published in the London Times in 1914 and later in many anthologies of war verse. It was selected in 1919 to accompany the unveiling of the London Cenotaph and, like so many memorial traditions, passed into common use across the Commonwealth. Its use on ANZAC Day might have originated with the Queensland ANZAC Day Commemoration Committee, which printed the poem on the cover of a collection of sermons and addresses for ANZAC Day, published in 1921. Binyon’s poem was also read at the laying of the Inauguration Stone at the Memorial in 1929.

The most well-known lines are:
They shall grow not old, as we that are left grow old;
Age shall not weary them, nor the years condemn.
At the going down of the sun and in the morning
We will remember them.

In Flanders fields, by the Canadian officer Lieutenant Colonel J.M. McCrae (1872–1918), is another popular recitation. McCrae was a professor of medicine at McGill University before the war. A gunner in the Boer War, he served as medical officer with the first Canadian contingent in the First World War and wrote this poem at the second battle of Ypres in 1915. It was published anonymously in Punch. McCrae was wounded in May 1918 and died three days later.
In military tradition, the Last Post is the bugle call that signifies the end of the day’s activities. It is also sounded at military funerals to indicate that the soldier has gone to his final rest and at commemorative services such as ANZAC Day and Remembrance Day.

The Last Post is one of a number of bugle calls in military tradition that mark the phases of the day. While Reveille signals the start of a soldier’s day, the Last Post signals its end.

The call is believed to have originally been part of a more elaborate routine, known in the British Army as “tattoo” that began in the 17th century. In the evening, a duty officer had to do the rounds of his unit’s position, checking that the sentry posts were manned and rounding up the off-duty soldiers and packing them off to their beds or billets. The officer would be accompanied by one or more musicians. The “first post” was sounded when he started his rounds and, as the party went from post to post, a drum was played. The drum beats told off-duty soldiers it was time to rest; if the soldiers were in a town, the beats told them it was time to leave the pubs. (The word “tattoo” comes from the Dutch for “turn off the taps” of beer kegs; Americans call this “taps” or “drum taps”.) Another bugle call was sounded when the officer’s party completed its rounds, reaching the “last post” – this signalled that the night sentries were alert at their posts and gave one last warning to the other soldiers.

The Last Post was eventually incorporated into funeral and memorial services as a final farewell, and symbolises the duty of the dead is over and they can rest in peace.

Silence for one or two minutes is included in the ANZAC Day ceremony as a sign of respect and a time for reflection.
The idea for the two-minute silence is said to have originated with Edward George Honey, a Melbourne journalist and First World War veteran who was living in London in 1919. He wrote a letter to the London Evening News in which he appealed for five-minute’ silence, to honour the sacrifice of those who had died during the war.

On 6 November 1919 the King sent a special message to the people of the Commonwealth:
I believe that my people in every part of the Empire fervently wish to perpetuate the memory of that Great Deliverance, and of those who laid down their lives to achieve it.

The King requested that “a complete suspension of all our normal activities” be observed for two minutes at “the eleventh hour of the eleventh day of the eleventh month” so that “in perfect stillness the thoughts of everyone may be concentrated on reverent remembrance of the Glorious Dead”
.
Two minutes’ silence was first observed in Australia on the first anniversary of the Armistice and continues to be observed on Remembrance Day, 11 November. Over the years, the two-minute silence has also been incorporated into ANZAC Day and other commemorative ceremonies.

After the one minute’s silence, flags are raised from half mast to the masthead as the Rouse is sounded. Today it is associated with the Last Post at all military funerals, and at services of dedication and remembrance.

Since Roman times, bugles or horns had been used as signals to command soldiers on the battlefield and to regulate soldiers’ days in barracks. The Reveille was a bright, cheerful call to rouse soldiers from their slumber, ready for duty; it has also been used to conclude funeral services and remembrance services. It symbolises an awakening in a better world for the dead, and also rouses the living back to duty, now their respects have been paid to the memory of their comrades. The Rouse is a shorter bugle call that was also used to call soldiers to their duties; being short, the Rouse is the call most commonly used in conjunction with the Last Post at remembrance services. The exception is the Dawn Service, when the Reveille is played.

In most ceremonies of remembrance there is a reading of an appropriate poem designed to help the listener understand the experiences of service people and their relatives in wartime.

In Flanders fields
In Flanders fields the poppies blow
Between the crosses, row on row,
That mark our place: and in the sky
The larks, still bravely singing, fly
Scarce heard amid the guns below.
We are the Dead. Short days ago
We lived, felt dawn, saw sunset glow,
Loved and were loved, and now we lie
In Flanders fields.
Take up our quarrel with the foe:
To you from failing hands we throw
The torch; be yours to hold it high.
If ye break faith with us who die
We shall not sleep, though poppies grow
In Flanders fields.
John McCrae (1872–1918)

For the fallen
With proud thanksgiving, a mother for her children,
England mourns for her dead across the sea.
Flesh of her flesh they were, spirit of her spirit,
Fallen in the cause of the free.
Solemn the drums thrill: Death august and royal
Sings sorrow up into immortal spheres.
There is music in the midst of desolation
And a glory that shines upon our tears.
They went with songs to the battle, they were young,
Straight of limb, true of eye, steady and aglow.
They were staunch to the end against odds uncounted,
They fell with their faces to the foe.
They shall grow not old, as we that are left grow old;
Age shall not weary them, nor the years condemn.
At the going down of the sun and in the morning
We will remember them.
They mingle not with their laughing comrades again;
They sit no more at familiar tables at home;
They have no lot in our labour of the day-time;
They sleep beyond England’s foam.
But where our desires are and our hopes profound,
Felt as a well-spring that is hidden from sight,
To the innermost heart of their own land they are known
As the stars are known to the Night;
As the stars that shall be bright when we are dust,
Moving in marches upon the heavenly plain,
As the stars that are starry in the time of our darkness,
To the end, to the end, they remain.
Laurence Binyon (1869–1943)