A woman and two children had a lucky escape after their car crashed into a fish shop in Ardross last night.  The woman’s van ploughed through the entrance of Selfish seafood store on Kearns Crescent just before 7pm.  Witnesses said the driver seemed to lose control of the vehicle while driving in the shopping complex carpark, clipping a parked car before crashing through a bollard and into the front of the store.

Two children travelling in the back of the car were uninjured while the driver was treated for minor injuries, according to witnesses.  Inspector Sharron Leonhardt said police were investigating the cause of the crash. State Emergency Service volunteers were called to the scene to carryout emergency repairs and stabilise the structural damage to the fish shop, which included a partially-collapsed roof. The SES Incident Controller carried out an assssment of the hazards and damage and the appropiate measures were put into place.  Temporary repairs were made to the building.

Shop co-owner Michael Jackson said staff had closed the business at 6.30pm, just minutes before the crash occurred.  “Where the car has come through, one of us would normally be right there cutting fish, so we’re very lucky in that regard,” he said.  “It’s a devastating blow for us – business has been hard for a while, but we were just getting back on track and now this happens.”

Witness Paul Musca said it was fortunate no one in the busy restaurant area had been injured in the incident.  “She was at high speed coming down through the carpark and bouncing off a parked car, so it could have been a lot worse,” he said. 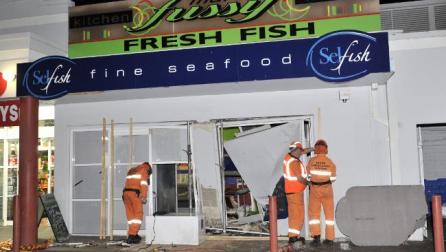 A mother and her children were lucky to escape uninjured after their van ploughed into an Ardross fish shop. Picture: Kerris Berrington Source: PerthNow