The body of a 56-year-old fisherman has been retrieved from waters off Perth after his boat was found with its motor running and a tuna fish on his line.  The man’s body was spotted from a helicopter about 18km off the Mindarie Marina in Perth’s north around 7am (WST) on Thursday after a major sea, land and air search.

His six-metre boat was found empty about 4pm on Wednesday around 100 metres off the marina with its engine in gear and a tuna on the line, Sergeant Adam Mack of WA Water Police said.  “It’s unknown how he ended up in the water. There are no witnesses,” Sgt Mack said, noting conditions were fine and calm on Wednesday.  The man was from Currambine, near Mindarie, and his wife has been informed of his death.  Seven aircraft, five boats, jetskis, quad bikes and horses were involved in the search that resumed for the man at first light this morning. 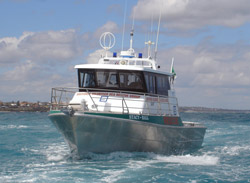