The Funeral of the late Henry Edwards

The funeral for the late Henry Edwards was held on Tuesday the 26th of October 2010 in Midland WA.  Family, friends, hundreds of SES Volunteers and FESA Staff came together to remember this hard working and dedicated person.  At the service lead by FESA Chaplain Ron Wingate there was a great out pouring of emotion as Henry s life was recalled and many tributes were paid to him.

First and foremost Henry was a family man and leaves behind is wife Judy and two children. Many of us at the funeral learnt more about him and his life away from the SES.  These included his early days, how he met this wife Judy and his interest in rallying and radio communications and all working things.

Henry was best known to us as a member and Leader of the Communications Support Unit where he gave countless hours of dedicated service to the SES supporting his SES colleges. Rob Crawford from the CSU spoke about Henry’s service recounting many stories, some which bought a smile to those gathered at the service.

At the end of the service members of the CSU formed a guard of honour as Henry’s casket was taken to its final resting place.

In Memory of Oliver Henry Edwards

Henry rest in peace your job is done, you will be missed and remembered its been a privileage to serve with you 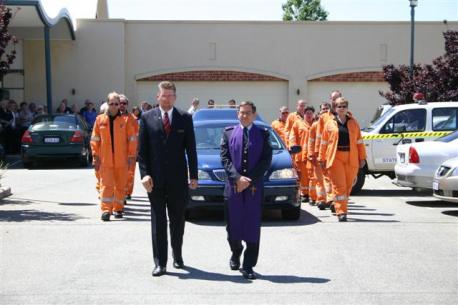