Its with deep sadness that we announce that long serving SES Volunteer Henry Edwards passed away on the 17th of October 2010 from a heart attack.  Henry was one of the most well known members in the SES and real character.   Henry will be remembered as a hard working and dedicated member of the SES Communications Support Unit and will be missed by all.

Lyn Bryant (Deputy Manager CSU) said that Henry returned from a trip to Northam on Wednesday and was not feeling the best upon returning home. He told Judy that he was going straight to bed, this for Henry was unusual. Like most of us, unless we are seriously ill we tend not to go to the doctor.   Henry had gone to his shed this morning to do some work, Judy called out to him and didn’t get a reply, and moments later she went to the shed only to find that Henry had passed away. Lyn has told me that Henry did not suffer and that it was a quick passing.

President David Price, committee members and members of the SESVA express their deepest sympathy and condolences  to Judy and the family as well as to the team at CSU.  Details of Henrys funeral will be annouced as soon as they are known. 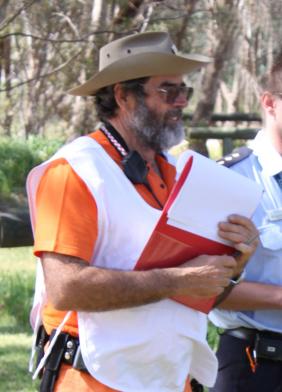 Henry Edwards at the Metro Challenge 2009