Police have urged an anonymous CrimeStoppers caller who provided information about the sexual assault of a teenage nanny to again make contact, as detectives continue the hunt for the Mosman Park rapist.  Sex Assault Squad detectives today pleaded with the person who contacted the crime-fighting hotline on the morning of Thursday September 23 to phone in again.  “The caller alluded to a possible motive for the offence and gave some specific details,” Detective Sergeant Frank Glynn said.  “We would like that caller to re-contact CrimeStoppers so we can further discuss and clarify the information.  “Police believe that information could be significant … this call could be crucial.”

The 19-year-old au pair had been caring for a two-year-old child at the Manning Street home on September 17 when she was threatened with a knife and sexually assaulted after answering the front door.  She had been at a nearby park with the child and returned home when she heard a knock at the front door.  Police say the man, who was carrying a bunch of lillium flowers, overpowered her and forced his way into the house where he restrained the woman and sexually assaulted her.  The German girl had been working in Australia as a nanny. She has since returned home.  The attacker is described as Caucasian, between 50 and 55 years, with balding brown/grey hair. He was wearing jeans and a polo neck shirt.

Police are still seeking information about a light-blue, compact style 4WD seen near the house around the time of the attack.  Anyone with information is urged to call CrimeStoppers on 1800 333 000. 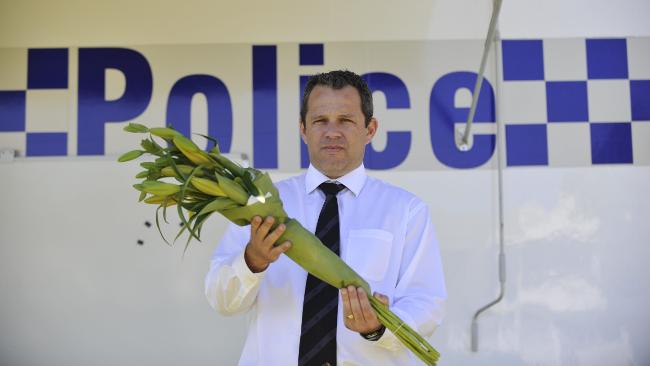 FLOWER CLUE: Detective-Constable Neil Worland with flowers similar to what was used as a decoy by the Mosman Park rapist. Picture: Theo Fakos  Source: PerthNow