A model for effective flood management by Chas Keys is a former deputy director of the NSW State Emergency Service.  With spring rains just beginning, the SES has proved itself very capable.  It may have escaped general notice, but there is much to indicate that a very good job of flood management has been done in Victoria this week. What has been achieved may well become a model for flood managers elsewhere.  People in low-lying areas were much better advised than is usual. Some who attended the early community meetings last Friday were initially sceptical. ”They laughed at us,” one meeting leader said afterwards. But by late Saturday, people knew there was no reason to laugh.

Clearly, a major lesson of disasters in Australia – that people expect and need timely warning with specific information about which properties are likely to be hit and what they need to do – was understood by the State Emergency Service.  The flooding has been widespread, on more Victorian rivers simultaneously than in any other flood episode since the early 1990s.

In some areas, it has been of a severity that is not often seen: at many places on the tributaries of the Murray River, it has been on a scale that occurs only once in every 20 years, on average.  A few locations have probably experienced close to once-in-a-century flooding.  Given the many rivers involved, the severity, and the number of houses taking in water, there has been stress on large numbers of people – including the flood managers, especially those in the SES, which by law has the task of co-ordinating the management of responses to flooding in the state.

The SES responded speedily and effectively. It employed a battery of management tools that are too infrequently used in concert in Australian flood management.  Last Friday, before the rain had struck, the organisation began conducting community meetings to advise people of the threat in the most high-risk areas, and planning to deliver warnings by going door-to-door.

By the time the flooding had started, variable message signs were being used on the main highways to inform motorists, a flood information line had been opened, the SES website was carrying Bureau of Meteorology flood predictions along with warning messages and details of community meetings, and professional hydrologists were being called in to incident control centres to advise on where the water would go once the rivers burst their banks, or if town-protecting levees failed to hold.

Social media were also used, as was the ”emergency alert” telephone system in the highest-risk areas such as Euroa, Myrtleford, Wangaratta and Shepparton.  Many messages have come out of this flooding. One is that floods need to be taken very seriously. A 2001 federal government report, prepared by the Bureau of Transport Economics, dealt with the cost of disasters of various types by state and territory. It found that flooding had, surprisingly, cost more in dollar terms than had bushfires in Victoria between 1967 and 1999.

A decade later, the events Black Saturday would have altered that picture (and, of course, there were many deaths in the fires), but the point remains that flooding is a serious threat in this state.  Its management needs to be invested in, just as fire management does, and people at risk need to be helped via educational campaigns and warnings to respond effectively.

It is also clear that the structural integrity of some of the state’s levees have been found wanting. Levee maintenance is a vexed issue, and it is all too easy for councils to let it slip during long periods of drought, such as the one that Victoria has experienced.  The flooding has been managed with intelligence systems that are still in their infancy. Much more information is needed about the impacts of flooding at specified stream-gauge heights so that accurate assessments can be made about which areas will be inundated or cut off.

It is to be hoped that this bout of flooding will be appropriately ”captured” in its aftermath, and that the state will invest in the studies that will develop the intelligence.  We should recognise, too, that we are in the middle of Victoria’s main flood season – a season that has ”failed” for some years because of the drought – and that the traditionally wet spring has three months still to run.

Indeed, there is a forecast of more heavy rain in coming days, and the ground across the state is sodden. Any rain in coming weeks will be highly ”efficient” in terms of flood production. It is entirely possible that we are seeing the start of the worst flood season in Victoria for many years.  While there may be more flooding to come, we have seen that floods can be managed well, even when the flood intelligence is scanty and most of the state’s rivers are bursting at the same time.  Chas Keys is a former deputy director of the NSW State Emergency Service. 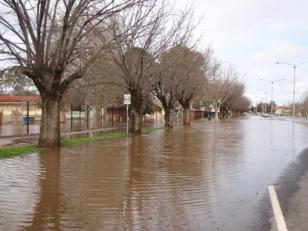