A strong earthquake has hit Christchurch in NZ.  The city centre has been seriously damaged.  Power and water supplies have been disrupted.   Many buildings have been damaged and the repair bill is estimated to be in the billions.

For the latest news 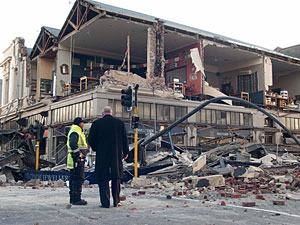 A CURFEW has been imposed in Christchurch, New Zealand after a major earthquake caused extensive damage in the nation’s second-largest city, Sky News Australia reported today.  Residents in the city of 372,600 were ordered to stay inside between 7pm tonight and 7am tomorrow as authorities battle to restore water, power and phone services in the devastated city.

About 80 police officers were being sent from Auckland to the South Island to help with law enforcement amid reports of mounting frustration, fighting, serious back logs at petrol stations and traffic jams as people try to leave the city, news website stuff.co.nz reported.  Residents were evacuated from some areas because of disrupted power and water supplies, and an official state of emergency has been declared.

As night approached, Christchurch mayor Bob Parker, said he was most concerned about isolated residents.  “The scale of what has happened here is enormous,” he told Sky, urging residents to stay calm and indoors.

The mayor said it was miraculous that no one was killed in the quake – measuring 7.0 according to the U.S. Geological Survey (USGS) – attributing that to the fact it struck about 4.30am when most people were in bed.  There were fires reported in the city as power was restored, and the central business district was cordoned off by police amid reports of looting and extensive damage to some older buildings. The area was declared out-of-bounds until tomorrow at the earliest.

Earthquake Commission chief executive Ian Simpson said the damage bill could be as high as NZ$2 billion ($1.6 billion). The Prime Minister John Key flew to the city in the afternoon and was inspecting the damage, local media reported. 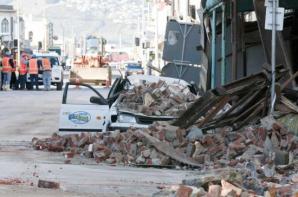 Civil Defence officials have asked residents not to flush their toilets, to use water sparingly, not to use their telephones, check on their neighbors, and to stay away from damaged areas while authorities work to restore services and assess buildings.  USGS experts said the quake, which struck New Zealand’s South Island 45km west of the island’s largest city of Christchurch at a depth of 5km, was the result of movement within the crust of the Pacific plate.

Scientists have described the earthquake as the most significant since the 1931 magnitude 7.8 Hawke’s Bay earthquake, the New Zealand Herald reported.
One man in his 50s is in a serious condition in intensive care at the Christchurch Hospital after a chimney collapsed on him. Another man, also in his 50s, was seriously injured by falling glass.

As many as 1000 residents from Christchurch’s seaside suburbs were told to prepare for evacuation with flooding expected due to broken water and sewage pipes.  Emergency services rescued 10 people from holes which opened up in the ground due to the shaking, stuff.co.nz reported.
Hotelier Richard Hawes said he thought he was going to die as his 130-year-old building shook, AFP reported.  “(It) wobbled like a jelly,” he said.

A number of aftershocks were recorded in the area and authorities were concerned about reports that the weather was due to worsen – bringing heavy rain and strong winds to the area in the next 24 to 36 hours.