Eddie and his friends are now in Alaska  and still having a great time.  Scenery and more scenery every where we look.   Today  we are  in Juneau which is the first port in the USA. 18/8/2010 Eddie reports that they arrived at Victoria on Vancouver Island.  Great scerney and a 5 star hotel, The Delta.  Even free internet access.  We are having a great time as I have said a few times.  The weather in now great and with day light saving its light until 9.00 pm.

There are 47 people on the tour , 16 from WA we have made friends with most of them.  Tonight we are just about to go for a walk in Victoria and tomorrow we go whale watching. 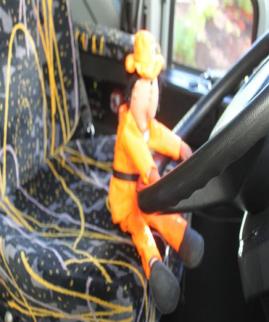 Our last two days before we board the cruise ship.

Photos:  Eddie with Nita and John on the Rocky Mountaineer and Eddie driving the tour bus

16/8/2010  Eddie reports that he is well in Whistler, the mountain bike centre of Canada.  Its very hot 35 degrees today.  All is going according to plan.  The last two days in the coach have been really long and Eddie, John & Nita are very happy to finish the long hops.

Eddie goes on a cruise ship on Wednesday which will be a nice relaxing change.  He is bit nervous, he has never been on a boat before and is not a strong swimmer. Water seems to soak up in him for some reason!!

13/08/2010   Eddie the SES Volunteer is having a great holiday in Canada. Eddie flew from Perth to Hong Kong and then on to Vancouver in Canada.  What a long flight he had and  was very tired when he arrived.  Eddie stayed at the Fairmont Habourfront hotel.   Eddie had never seen such a wonderful place.   Unfortunately it was raining in Vancouver but that didn’t stop Eddie from seeing the sights.  Stanley Park, Gas Town and little China were just a few places he visited.

It was then time to board the Rocky Mountaineer train, two days of just fantastic scenery and food.  The staff on board the train really looked after Eddie, drinks, snacks and fine dining.  An overnight stop at Kamloops gave Eddie the change to go to the rhythm of the rails show which was a nice buffet meal and lively show of 50 and 60’s music. Next day is was back on the train and off to Banff.  In Banff Eddie had a helicopter ride into the mountains and took a cable car to the top of Sulphur Mountain.    Eddie is about to move on to Lake Louise for the next part of his trip.