The mother of a toddler who spent a cold and wet night lost and alone in dense bush at a remote campsite north of Broome has described the “hideous” feeling she had once she realised her daughter was missing.  Hailey Boyd yesterday thanked the dozens of police, State Emergency Service volunteers, friends and strangers who offered to help search for 2 1/2-year-old Darzy when she was reported missing from the remote Quandong Point campsite, about 30km north of Broome, about 6.30pm on Saturday.

The search also involved aerial spotter planes, helicopters and boats. Local community members and friends from Broome joined the search, with friends Dave and Wade finding Darzy in dense scrub about 200m from the campsite shortly before 7.30am yesterday. “All the guys that were camped down at Quandong Point, pretty much every camper from three or four kilometres away, walked down and offered to lend a hand,” Ms Boyd said. “It was pretty hideous, we just had to stay positive and hope for the best.”

Ms Boyd said her family were regular campers and Darzy had never wandered before. She said she was “just shocked” when told her daughter had been found and gave her a big hug once she returned to the campsite. “She was fine, really, she had some cuts and scrapes from sticks and trees but she was pretty good really,” she said.

“The guys from the ambulance were really good, she really perked up and got a bit of colour back and by the time we left she had been quite cheeky.
“There was a big bunch of us and there were a lot of kids so whether a few of them got it in their heads that they wanted to go for a meander, I don’t know, but she may have followed a dog or kangaroo off to the scrub and then got lost.  “Normally she’s pretty good, she just hangs around.”

Broome SES deputy unit manager Vaughan Shelley said Darzy was cold and hungry but otherwise unharmed.  “She was a little bit cold as you can understand after being stuck out in the scrub all night by herself but relatively healthy,” Mr Shelley said.  “It’s always wonderful when the end result is a success.” 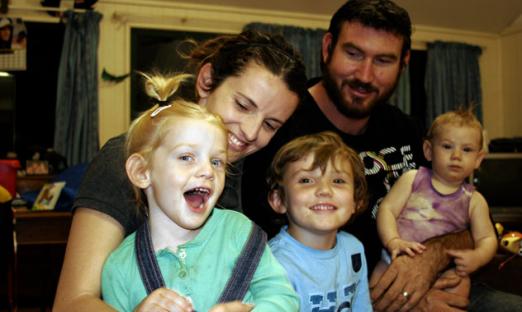