A large crowd attended the funeral service for Neil Davidson OAM CD yesterday, Thursday 8/4//2010. The crowd represented Neil’s large family, friends, the church, the Mandurah RSL, City of Mandurah, bowling clubs and emergency services.  The service was conducted at the Roman Catholic Church in Mandurah.  Neil started his military service during WWII when he “upped his age” and undertook service in New Guinea. Neil was also remembered for his significant work with the Mandurah RSL for his welfare and advocacy work.

He undertook the role of Local Manager of Mandurah SES in late 1984 and was awarded an OAM for his leadership for this volunteer work. His death ended over 35 years of service.He also commenced a term as a councillor for City of Mandurah at the age of 75.  Neil was a man committed to serving the community, but still found time for family, bowling, fishing and an interest in race horses.  At the wake held at the Mandurah RSL, a few stories were told about Neil showing a fun loving and compassionate man.  His wife, Pam, was acknowledge for her support of Neil in his many endeavours and especially her care in the past few years as Neil’s health was failing. 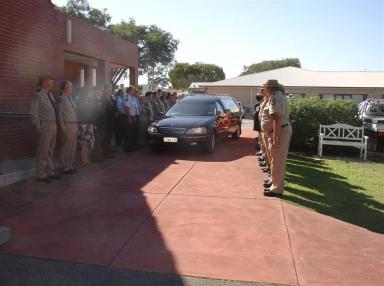 FESA staff and SES volunteers providing a guard of honour as the hearse arrives at the church.